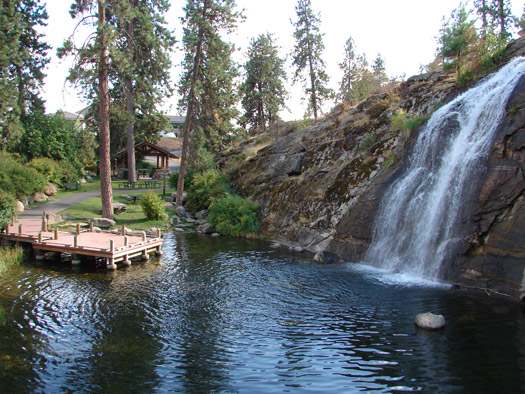 Find the newest Spokane Valley homes for sale below. Spokane Valley is a city east of Spokane, with a thriving economy and terrific real estate market of its own. The city has a population of around 92,000, which is about half of the population of the nearby city of Spokane. "The Valley," as it is called by locals, is home to miles of shopping along the main thoroughfares that cut through the area, the Spokane Valley Mall as well as Carrington College and ITT Technical Institute. The area is quite beautiful, and is named for the valley in which it lies. It is the first city you encounter coming into Washington from the border town of Coeur d'Alene, Idaho. For further information about Spokane Valley properties for sale or to schedule a private home showing, contact our local real estate experts today! Read more about Spokane Valley real estate.

The first settler to reside in Spokane Valley was a trapper named Antoine Plante. He had a Native American wife and family and he operated the first ferry that crossed the Spokane River. The city of Spokane Valley was incorporated in 2003 when the population grew so large that the area was cut off from the previous home of Spokane. The area is simply known as "The Valley," a name which comes from when it was simply a part of Spokane, but still used by residents today even though it is its own city. Spokane Valley barely misses out on the top ten most populous cities in Washington State, being beat out by Federal Way.

Things to Do Near Spokane Valley

The area is home to the Spokane Valley Heritage Museum, which opened in 2005. It is located in Township Hall. The museum has a huge amount of historical items from Spokane Valley and regular exhibits on its history. Like the city of Spokane, Spokane Valley is in the county of Spokane. Some of the noteworthy locations in the city include the Inland Empire Zoo and the Apple Center. The city has several shopping centers include Argonne Village, Sullivan Square Shopping and University City Shopping Center as well as Greenacres Shopping Center.

Spokane Valley is located west of Coeur d'Alene, Idaho and surrounds the town of Millwood. It is just east of the city of Spokane, WA. Fairchild Air Force Base and the 92nd Refueling Wing are among some of the top employers in the greater Spokane area. The Providence Healthcare System is also among the largest, but like the city of Spokane, the largest employers in the area include the State of Washington and the public schools in the area.

Spokane Valley has a terrific educational system, served by the Central Valley School District which extends out into more rural areas as well as Liberty Lake. Spokane Valley does have one major private academic institution, the Valley Christian School, and there are 22 public schools in the area. Although the city has no large educational facilities of its own, there is the nearby Gonzaga University and the campus of Eastern Washington University that are both in Spokane proper. It does, however, boast Carrington College, which turns out a lot of students in occupations like medical assisting.